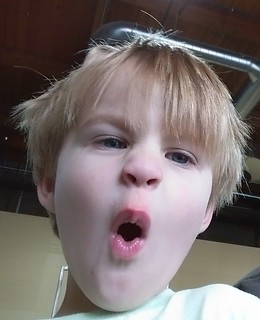 On things to run down the stairs and shout into the kitchen in your most dramatic voice: “It’s getting worser! We’re running out of time!”

On sticks, where you can get a good price: “I bought it from my grandfather.”

On sitting on dad’s pillow: “I’m going poop on this astronaut potty.”

On providing his mother with medical care: “This might not hurt.”

On the dark reality of the apparently carefree game he’s playing with his sister: “We’re making you into a poisonous ghost!”

On his Lego creation, described in an extremely angry voice: “That thing delights you!”

On useful commands to shout repeatedly at the playground: “Activate manual steering now!”

On the dance music on the radio: “I like it, but it’s not very good.”

On everyone’s favorite green sushi condiment: “Would you like some salami to dip them in?”

On how to make an old man in the supermarket checkout line shake his head and mutter about things he has to put up with: “Santa!”

This entry was posted in Uncategorized and tagged Cute, Cute Kid Quotes, Vocabulary. Bookmark the permalink.