Dialogue with a Daughter

Abigail and I had a brief debate this morning. She had strong feelings on the issue of the orientation of her blanket relative to the floor as well as in relation to her  stuffed lion. She also felt that I wasn’t taking my job of organizing these items seriously enough and had concerns as to whether I even understood the entire vision to begin with. In order to express her opinions on the matter, she used a communication system that is now becoming fairly standard in our household, that of crying and jumping, punctuated periodically by sentences that are either entirely incoherent or have only the barest resemblance to sentences that would prove useful in a scenario like this one. Something else you can do in these cases, it turns out, is express your disapproval of the current work that has been done by picking it up and either crumpling it or waving it around wildly to emphasize the depth to which you feel that the workmanship has, to date, been sub par.

It turns out that my pr 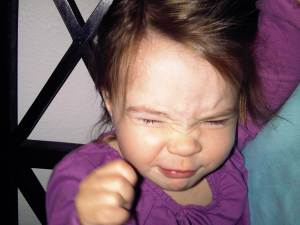 imary strategy of trying to engage calmly and discuss the issues of blanket and lion layout schemes – which proved quite successful initially, albeit temporarily – was only adding to both the level of Abigail’s frustration as well as the quantity of fluid streaming from both her eyes and nose. Several tissues were employed over time to deal with those drainage problems.

After some consideration, the board – ie, me – decided that we should table – ie, crib – the issue for the time being and focus on the pressing issues of what Abigail should wear today and what she would be eating for breakfast. After initial opposition to this plan, Abigail seemed to realize that her shirt drawer was, in fact, pretty interesting. Some speculation was also made about what the dog was doing, and she was invited to go find out, provided she waited until a new diaper could be strapped to her bottom.

And all of this created a surprisingly strong bonding experience. I’ve seen her throw tantrums before, but I hadn’t realized that they’d been minis until the full-blow Vesuvius of this morning. We ended up having a very nice time this morning, including some real-life hopping on pop. Which is actually not recommended. She goes for the full diaper slam on the belly.

This entry was posted in Abigailia and tagged Fatherhood. Bookmark the permalink.

2 Responses to Dialogue with a Daughter