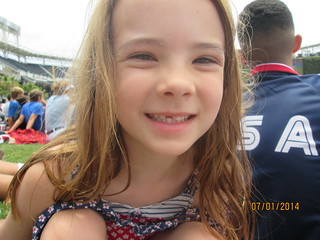 On her desire to spend more time with her grandparents: “I want to see them until they’re dead.”

On collecting her fallen pencil and thus ending a mini-tantrum: “That’s not the only thing I’m crisising about.”

On where her school is, using her Southern Californian navigation system: “It’s right on the other side of the closest freeway.”

On Atlas by Battles: “I think that song is Spanish planets. The solar system in Spanish.”

On her new balloon wand, particularly its power over balloon animals: “Gabe, ready for me to curse your giraffe?”

On her accrued bounty from doing chores: “Dad, I have eight dollars! And one credit card.”

On earnest conversations with Maggie: “If you want, I could make you dog shoes.”

On dad’s mistake: “That’s not a tone of voice! That’s a whiny voice!”

On soccer allegiance: “Are you floating for blue or red to win?”

This entry was posted in Abigailia and tagged Vocabulary. Bookmark the permalink.