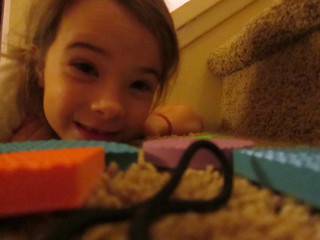 On crabs: “They’re bones with eyes. Seriously. That’s what they are.”

On the deep meaning of her artwork: “This is you and this is money that you’re giving to me.”

On the morning rush: “You always think we’re late, but we’re not!”

On forcing her brother to accept a dramatic rewrite of the rules: “You want to win, dontcha?”

On being backed into a rhetorical corner: “I’m not arguing!”

On things that were pronounced exactly the way you think: “What does Uranus look like?”

On clearly not paying attention to her brother: “Ohhh. Very interesting.”

On the monarchy: “King is a boy word for queen.”

This entry was posted in Abigailia and tagged Cute, Cute Kid Quotes, Vocabulary. Bookmark the permalink.